By Ian LamontFebruary 1, 2016Blog
No Comments

The following article about Twitter accounts to avoid was excerpted from Twitter In 30 Minutes, by author Ian Lamont.

Egg accounts are often new or abandoned accounts, created by people who haven’t uploaded a profile picture to Twitter. For people who have just started tweeting, an egg account is normal (maybe you’re an egg, too!) However, egg accounts that haven’t been updated in months or years are not worth following. The people who own them have given up on Twitter, and most likely won’t ever share something of interest.

Some people on Twitter use Twitter to belittle others, spread bizarre observations, or share intimate details of their warped lives. The tweets are littered with swears and stupidity. Sometimes the accounts belong to teens who don’t know any better. Sometimes they belong to adults who haven’t matured. Rarely do they offer insights or information of value. Don’t bother following them.

Not long after you start using Twitter, you will receive a notification that someone is following you. Most of the time, the followers are legitimate — maybe they are people you know, or people who are following you because of some shared interest.

But others may look a little…off. The tweets seem vapid or unauthentic. They follow hundreds or thousands of people, but have very few people following them back. Links appear in their feeds that don’t come from well-known domains. In addition, the profile pictures tend to show unusually attractive people. Here’s an example: 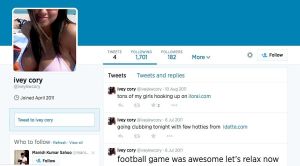 Don’t get your hopes up if someone like this follows you. Random attractive people probably don’t want to follow you (or me, for that matter). In fact, such accounts do not belong to attractive strangers tweeting about football, travel, and hooking up. These accounts actually belong to spammers, and my guess is most of them are unattractive, basement-dwelling losers who tweet links to low-grade dating sites, advertisements, or online shopping portals that might generate a few pennies every time someone clicks. Don’t click the links, and don’t follow them back!