If you need to delete a tweet, or remove a retweet on your timeline, check out this short video. It’s easy to delete tweets using the Twitter mobile app for iOS or Android. Narrated by the author of Twitter In 30 Minutes (3rd Edition).

The Twitter app for Android devices is closely integrated with the phone’s operating system, which can make registration easier. Note that you may see some variations in the interface, depending on which flavor of Android you use.

Here’s how to get started: 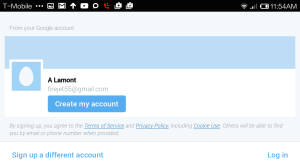 For this device, Twitter used the email address associated with the Google Play account (and the phone) to start the registration process. Tap Sign up a different account to register with a different email address.

The registration screen has fields for Name, Email, Username (which will determine your Twitter handle) and phone number. It’s almost identical to the iOS version. However, the Android interface for tweeting, adding people, and changing your profile is quite different than iOS (if you’re coming from an iPhone).

The Android Twitter app for phones and tablets will prompt new users to customize their profiles with photos and a brief bio. It’s very convenient, as you can use selfies and other photos taken with the phone’s camera. To edit your profile, follow these steps:

This article was excerpted from Twitter In 30 Minutes, by author Ian Lamont. Download or purchase the book here.