The top-selling Twitter book will walk you through the basics, using plain English, step-by-step instructions, and lots of examples. In no time, you’ll learn how to:

There’s more. Twitter In 30 Minutes, 3rd Edition shows you how all kinds of people use Twitter to promote their businesses, connect with their followers, explore their interests, and have fun! It’s peppered with real-world examples, from everyday people to celebrities. Authored by award-winning technology journalist Ian Lamont, the revised edition of Twitter In 30 Minutes covers Twitter’s new interface for the Web and mobile devices such as the iPhone and iPad. More than 40 screenshots have been updated, along with instructions for registration on iOS and Android devices.Twitter In 30 Minutes, 3rd Edition is a perfect tutorial for people who are new to Twitter, as well as those who already have accounts and want to learn how to get the most out of Twitter. Buy the book today! 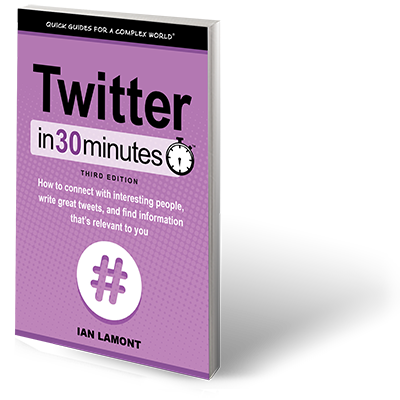 "Twitter in 30 Minutes" by Ian Lamont was an easy and fun book to read on how to set up a Twitter account and use it. The book had several tips and common sense advice which I really appreciated. Also explained were the different symbols used in tweets and what they mean.

I didn't know Twitter from a tweeter (or a base, for that matter) but this book gave me a great start. I highly recommend it if you want to know Twitter basics. I'm planning to give it as a gift to friends.

I picked a rainy afternoon in Seattle perfect for a walk through of this book. Worth the time and a good guide.

For those new to Twitter, this is a great book for a first time user. Step-by-step instructions, and pictures to follow. I would highly recommend this book. The author is easily accessible if you have any questions. You will not be disappointed.

Loved it! The author really did concisely write a great introduction on how to start using Twitter. Thanks, Ian!

Great book for the beginner. Breaks down all parts of the application and explains them in layman terms. Makes you feel more comfortable using Twitter.

Before I show you how to sign up for Twitter and start using the service, let’s take a brief tour of Twitter to better understand how people use it. We’ll start with a famous person (Oprah Winfrey), move onto a Twitter account operated by a local business, and then see how ordinary people use Twitter.

If you are sitting near a computer, or have a mobile phone, open a Web browser and type twitter.com/oprah into the address bar. This is the Web address for the Twitter account belonging to Oprah Winfrey, the talented American television host, actress, and media mogul. If you are sitting at a desktop computer, you will see something like this: 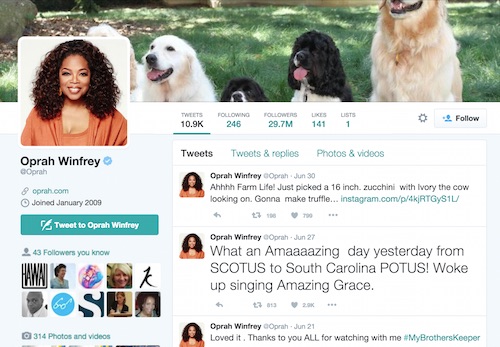 There’s a lot going on. Photos and seemingly random messages litter the page. Elsewhere there are references to Tweets, Followers, and Following, along with numbers. There are buttons and strange symbols. What’s happening here?

Think of twitter.com/oprah as Oprah’s public display case. She (and her staff) determine nearly everything seen on this page. Most of the action takes place in the center of the screen. On the left side of the page, you can see Oprah’s name and her Twitter name, or “handle”—@Oprah (pronounced “at-Oprah”).

The front page of the @Oprah Twitter account also includes photos of Oprah, which often come from her magazine. She regularly changes the profile picture, and sometimes uses funny or striking images. Once she featured a photo of herself with a giant Afro. It looked outlandish, but Oprah has a sense of humor and that’s what she wants her fans to see!

Below this are some numbers corresponding to tweets, following, and followers. Here’s what the numbers mean:

Tweets: A tweet is a message that is no more than 140 characters in length. Oprah has sent out more than 10,000 such messages. This seems like a lot. However, she has been using Twitter for years. Considering each message takes less than a minute to compose, it’s not hard to create more than one thousand tweets in a single year. Oprah’s most recent tweets are shown at the top of the page. If you keep scrolling down, Oprah’s older tweets will be revealed.

Following: This number refers to other Twitter accounts that Oprah follows. There are relatively few people on the list. If you click on the number, you will see who they are. Most are media personalities, guests who have appeared on her show, and her staff. When one of them tweets something, Oprah will see it when she visits twitter.com or opens the Twitter app on her phone.

Followers: Oprah has lots of fans. The “M” next to the number stands for “million.” In other words, upwards of 30 million accounts have chosen to “follow” Oprah on Twitter. This means the people who operate the accounts will see Oprah’s tweets when they look at Twitter, along with any other accounts they are following. Following a Twitter account is kind of like “friending” someone on Facebook, except it’s only one-way. In other words, you can follow people on Twitter, but unlike Facebook, they don’t have to follow you back. In Oprah’s case, millions of people are following her, but she doesn’t have to reciprocate.

Below this info are Oprah’s most recent tweets. What is she talking about? Let’s take a look at a sample …

To read the rest of Twitter In 30 Minutes, 3rd Edition, download the ebook or buy the paperback. @Oprah Twitter profile and tweets courtesy HARPO Productions, Inc.